Let us for a while reflect back to the hard times of South Africans when life was a challenge for all, blacks and whites due to the apartheid regime that was in place.

Interesting enough there use to be two boxing sanctions in South Africa, one for the whites and the other was for the blacks. The boxing coverage magazine of the time was even split in half, the front was covering white boxers and the back was all black fighters. This continued for a while until the boxing board made the necessary changes to have one lineal champion per division, mixing black and white fighters to get the real champion.

I personally believe that was the progress to our country, and let me tell you right now that happened way before 1994, in the 80’s, and for that, let us salute the fighters for accepting those radical changes in those tough times.

One of the first fights between a black and a white boxer was actually between local black fighter and the foreign fighter in the 70’s. The fighter I can think of, that is among those very first black fighters who participated in the strange fighting game of blacks and whites in South Africa, is Norman “Pangaman” Segkapane (RIP) when he fought the journey man from Aalborg in Denmark, Joergen Hansen. The fight took place in Rand Stadium in Johannesburg, the incredible triple header bill, where Pierre Fourie (won) was fighting Tom Bogs (lost); Joergen Hansen (won) against Norman Segkapane (lost), Elijah “Tap Tap” Makhathini (won) against the Brazilian Juarez de Lima (lost) and Kokkie Olivier (won) was featured in the same bill against the French boxer named Roger Zami (lost).

Think of the mixed emotions it must have been when the South African fighter, in South Africa, the black Norman Pangaman Segkapane was beaten by the white boxer from Denmark. The open minded white person would see the South African fighter losing, hence disappointed and yet someone else would celebrate the loss of the un-favoured colored boxer. The reality is, no boxer was part of any of that racial agenda, they were only fighters and only doing their job, which was fighting.

When I was studying at Rhodes University in Grahamstown, Eastern Cape, I once came across the autobiography of the black fighter from Canada Larry “The Toronto Terror” Gains, the book name “The Impossible Dream”. He illustrated the unfortunate experience and coincident of two great fighters, the American Joe “Brown Bomber” Louis & the German, Max “Black Uhlan of the Rhine” Schmeling. These two fighters were simple men that wanted to be world champions, they absolutely had no interest in politics, yet they were pulled in the mist of it, and that was because of the war between the Germans and the Americans. Larry Gains explains in his book that Max Schmeling was a sweetheart as compared to Joe Louis, he was soft, polite and even friendly than his arrival, but the picture that was painted was the inverse. Joe Louis was the angel and Max Schmeling was the demon, simply because Max happen to be fathered by the German parents (associated to Hitler), how on earth can that be fair to the man? He never earned the respect he deserved as a fighter because of his origins, until his last days of his life, people referred to him as a fighter that gave American soldiers the mental edge that Germans could be defeated.

Having said all the above, there was a great fighter from South Africa, who had no contribution to his white skin color he was born with, he was fighting in deep trenches of the Hood (as Americans would say). He was making the name for himself, he was beating all the great black fighters clean and square. He was giving second chances to the great black fighters of that era and beating them again. He had to fight that group of fighters simply because the best competition in the fighting game at the time was mostly there.

He was fighting in Kwathema in Springs, Mphatlalatsane in Sebokeng, Diepkloof in Johannesburg, Vosloorus in Boksburg and Portuguese Hall in Johannesburg. He earned reputation for his exciting relentlessness fighting style, consistently beating his opponents to the punch. He became the South African Jnr Lightweight Champion, oh! let me correct myself, he became the peoples champion on the 9th April 1983. 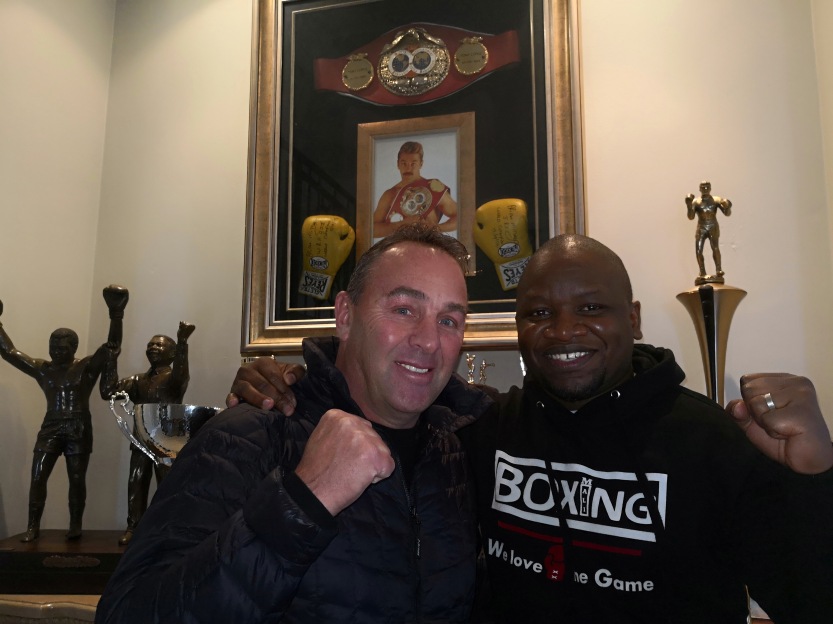 Brian Mitchell is the living legend I am talking about, later in his career he would pay for all the sins of the past he could not control, let alone the fact that he was the people’s champion, fighting and making friends with great black fighters of the past. He was informed by the World Boxing Association not/never to defend his World Championship Title in SOUTH AFRICAN grounds. WBA ordered him not to do so because they did not agree with the apartheid government policies between blacks and whites. How unfair was that to the champion? a never heard of indeed, even to date. Life can be very strange, I must say, hence you will often hear wise men saying “IN WAR, INNOCENT MEN BECOME VICTIMS OF CIRCUMSTANCES”

Did he stopped as I would have? No ways, not Brian. He went on to defend his WBA title 12 times abroad, beating each and every opponent in his back yard just like he did to the South African fighters when he defended his SA jnr lightweight title 9 times without a single loss.

Brian Michell’s achievements as a boxer and after his boxing career are extra ordinary.

His impressive professional boxing record is 49 fights, 21 knockouts, 3 draws and 1 loss in a period of 15 years.

The 1 loss he suffered, was reversed 3 more times against Jacob “Dancing Shoes” Morake

I sometimes feel I am being biased when I analyze Brian Mitchell’s career, maybe I like the guy so much, nevertheless, I feel the first fight was premature and the reasons are as follows.

Brian had 6 fights going to the fight of Jacob “Dancing Shoes” Morake, 3 of Brian fights was scheduled for 4 rounds and the other 3 was scheduled for 6 rounds, and the man he was facing in the 10 round fight was a formidable smooth fighter, who was sliding down below in his feet and blazing with his hand speed, Jacob “Dancing Shoes” Morake. He had 23 fights going to that fight and he was among the top real men of the division. Maybe Toweel the promoter/manager took it a bit far for Brian. The interesting thing, is the fact that Brian was just as competitive against Morake.

Morake won the fight on 1982 in Kwa-Thema Civic Centre, Springs.

The next fight was on 1983 at Wembley Sports Pavilion, Johannesburg, Brian Mitchell defeated Morake by split decision for the SA Jnr Lightweight Title.

The following fight was in Kwa Thema Civic Centre, Springs once again on 1984, and Brian defended his SA Jnr Lightweight Title by unanimous decision.

Their tragic fourth encounter in Sun City (Superbowl) on the 2nd November 1985, was the last fight of Dancing Shoes Morake, he was stopped by Mitchell in round 12, after he took Mitchell’s punches, he went down, snapped the back of the head/neck in the lower rope of the ring, and was unconscious. On the following day, the 3rd November 1984 at the age of 30, Morake died due to the injuries sustained in the bout.

The loss affected Brian because Dancing Shoes was not only the opponent to him, he was a friend and a brother. They sparred and trained together many times before their tragedy fight.

“His loss made me invincible when I challenged Alfredo Layne, let me be honest with you Malibongwe, I went in that fight willing to die for that world championship belt” he explained.

Some of the 3 draws were controversial, but nevertheless they were all avenged, anyway who cares?

In conclusion, Brian Mitchell won against every man he ever fought in professional boxing, and that to me sounds undefeated…